The term “synthesis” comes from Latin’s “composition,” the Greek root nearly translating as “to put together.” Place “video” before this and it visualizes the stages encountered through the interplay of light, space and point of view. For Suzy Poling and Jennifer Juniper Stratford, video synthesis is a point of departure for their back-to-back, multi-month residencies at downtown LA’s experimental media HQ Coaxial Arts. Awarded the Mike Kelley Foundation grant, Coaxial plays host for both artists to share site-specific worlds through their in-house, live-taping studio Experimental Half-Hour (EHH). Synthesizing— in every sense— analog technologies with HD equipment, EHH is a broadcast platform founded by Coaxial’s frontrunners Eva Aguila and Brock Fansler. Commencing with Poling’s 10-week Infinity Stage in summer, EHH propels a temporal occupancy of mirrored sculptures, amorphous performers, and noise-rich soundscapes beyond a blackened-room and onto any screen— now forever encapsulated as an EHH “episode.” Packing the house for the inaugural event Infinity Stage: Light Axis and the Human Mirror, Poling’s performance is most enthralling viewed through the taping: a holographic playground follows human forms sliding within marbled moving panes. Poling appears as a cloaked metallic shaman among two accompanying performers, [in]advertently alluding to a transmedial oeuvre. A performer, painter, photographer, musician… Poling is a conductor teetering the in-between to convey media-charged, fragmented yet “total” vignettes of the other. Evolution, metamorphosis and scale always pervade Poling’s work, so reconfiguring Coaxial’s spatial dynamics throughout her residency makes sense. Each of the four events grounding Infinity Stage premiered an adjusted environment for participatory action: a performance, workshop, installation with live music acts, and a curated screening. The residency’s title speaks to the antagonisms Poling uses as a bridge: a “stage” of set framework coupled with the elusive, never-ending allure of “infinity.” Poling relays her intent to investigate “what the mirror’s refractive abilities are in relation to live video synthesis and human form,” casting the performer as a media malleable “structure for light phenomenon and transmissions to occur.” 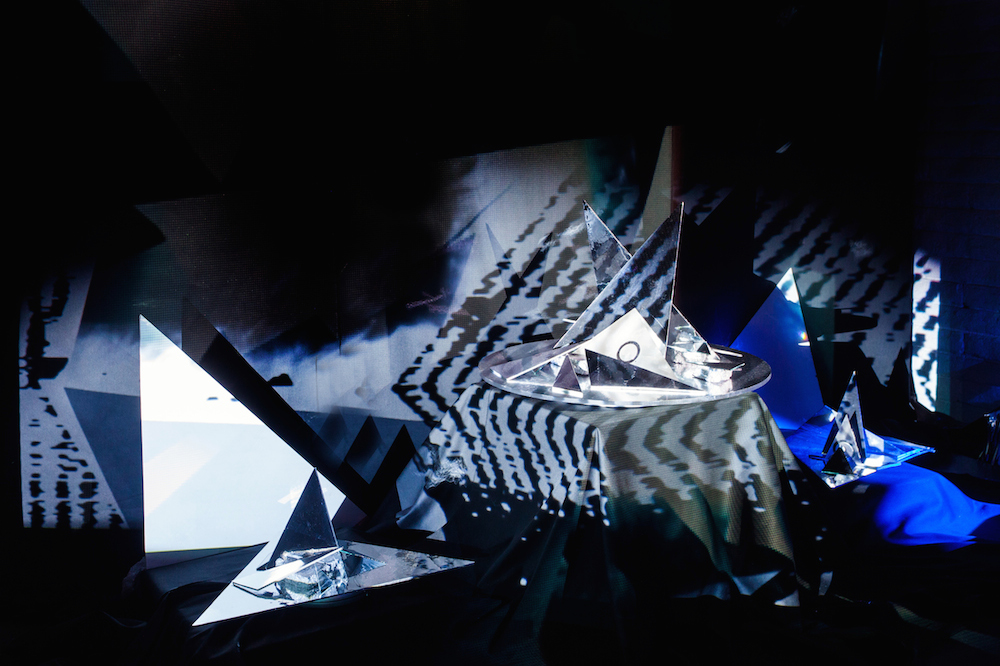 Like the Bauhaus, Poling explores the symbiosis of art and technology, movement and stage-space design, and light as kinetic sculpture. And, like the Bauhaus, Poling’s IRL stages find their limits shaped by architectonics. What Walter Gropius intended to alleviate through design of Total Theatre is alleviated for Poling by way of EHH’s post-production lens: remastering real-time gestures into opacities of multiplicity; extending space into virtual apparitions; attuning machines as [in]visible agents. Come October, JJ Stratford took over with her first event under the auspices of Telefantasy TV. Since 2004, Stratford has fused mind melting mutant video and television experiences under the umbrella of Telefantasy Studios. “Scavenging the ruins of the post-digital-apocalypse,” Stratford scours cast-off analog equipment from Hollywood backlots to furnish highly stylized sets. Like Poling, Stratford stars as director, collaborator, spectator, and other-worldly investigator— redeploying technologies to dress cinematic encounters that question relationships within mediated futures. If screen-based art ever seemed to limit the canon for the experiential to take form—  Stratford’s execution of Telefantasy TV coupled with EHH’s faculties exercise every facet of digitization to prove wrong. After all, this is a “tele-” “-fantasy” bearing the motto and tag line inducing all to “turn on, jack in and rock out.” Launching October 6, Stratford premiered Telefantasy TV at Coaxial, unveiling the mysterious cyborg deemed “H.A.R.R.I.E.T” in prior announcements. So, what and who is “H.A.R.R.I.E.T.”? To the“average” media-saturated pedestrian, H.A.R.R.I.E.T. could be what one attendee likened as the “Titanic on mushrooms.” Sprawling Coaxial, H.A.R.R.I.E.T. is an interlocking mass of 12 CCTVs, fanning in 2 rows of 6 from the focal of an annular computer eye. A colossal monument, Stratford fuses a CGI aesthetic into a modular sequence seducing referents to sacred geometry, Doctor Who’s TARDIS, and Donna Haraway’s A Cyborg Manifesto. 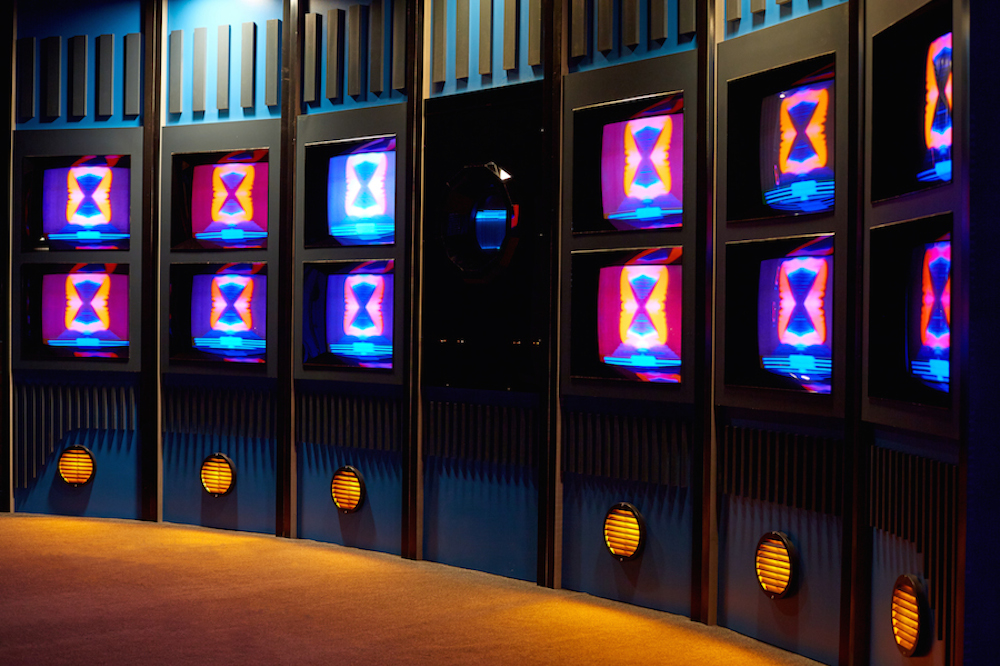 Elevating each residency via broadcast, EHH articulates H.A.R.R.I.E.T. in the Telefantasy TV Cybercast: Future Crew— framing Stratford opposite counterpart Claire Evans. Together, they are the “Future Crew” tuning-in live from “Chiba City,” “the entertainment capital of the greater multiworlds.” Reporting on the “real innovations in network program technology” Stratford elaborates H.A.R.R.I.E.T. as a solution to “bridge the natural balance between the information feed and the media stream.” H.A.R.R.I.E.T., she explains, unites “artificial intelligence with network communications and human interactions” enabling individualized experience far “beyond what people expect of television.” At Telefantasy TV, H.A.R.R.I.E.T. dictates the hierarchies of engagement each of the four programs revolves within and around. Afterall, she’s a “kind of hardcore” “feminist.” She’s a unique computer that doesn’t rely on code but functions like a manifesto. She’s also a satirical fixture— a hardware-heavy, cutting-edge machine running on “millions of empathy” and “BTL (Better Than Life) Dreamchips” somewhere around year 2053. She’s a 21st century product campaigning to stimulate neuro-pleasure in an age over-saturated by pop culture, communication technology, and consumption. H.A.R.R.I.E.T. is a constant yet elusive vehicle for Stratford— one that blurs human and machine, human and animal, nature and artifice, apathy and empathy. For Poling, video synthesis is applied to elaborate a narrative and setting in perpetual flux. Changing over time, Infinity Stage’s activation of the human form and video as a medium varies according to the shifting elements in focus, with Poling herself assuming varied guises and perspectives throughout: entering the stage as performer and departing as spectator. Whereas for Stratford, video— its appropriation, dissection, and manipulation— narrates each phase of action. H.A.R.R.I.E.T. is the image-object: the unmasked cyborg revelling in metaphysical dislocation; a sub-machine built of archaic prototypes and future-mergers; a tangible mise en scène through which Stratford commands us as spectator in the viewing experience. Telefantasy TV’s residency is on view by appointment at Coaxial (DTLA). All-access events continue with H.A.R.R.I.E.T. gallery hours 7-10pm Thursday, November 3rd and close with F.L.O.W. Future Ladies of Wrestling 8-11pm Saturday, November 5th.

All photos © the artists.