Art Los Angeles Contemporary (ALAC) differentiated itself by making the daring fair leap of dipping a toe into the murky waters of virtuality— remember the VR environments by Jeremy Couillardand at Louis B James (New York) or the ear-bending 6-channel video installation of Matt Stokes at Workplace Gallery (Gateshead)? No?! Well, you missed it. Avatars, computers, cognitive complexities and off-the-wall approaches are lacking at ALAC’s eighth edition in favor of artificial, often colorful, heavy-handed imitations of the natural and organic— even the “Eat & Drink” atrium is stripped of actual plant foliage— resembling more of a barn than an atmospheric greenhouse. Dangling below the, at most, half dozen plants of this barren tent stands THROUGH, Timo Fahler and Rafa Esparza’s second collaborative rendition of A Post Industrial Snake. The sporadic rebar serpent surrounds a rectangular mountain of hay decked with white stars and stripes. A slithering sequel to their fall show at Club Pro, accessing the monumentality of THROUGH is unfortunately quite literally prohibited thanks to retractable belts of crowd-control stands. Keeping it “safe” may be the best way to sum-up ALAC 2017’s Barker Hangar take-over— boasting a noticeably trimmer exhibitor list and an expanded theatre of program-packed events. Another term may be “flighty”… what’s with all the birds? Birds cast in ceramic, birds strewn in sloppy sequence, birds locked in luan… Basically, birds replaced extension cords this year. If you went to #ALAC2016, you may recall the joint presentation of Carl Mannov by Christian Anderson(Copenhagen) and Standard (Oslo). Mannov’s 5-piece installation juxtaposed actual abstract paintings with concrete-and-plaster reliefs, adjacent to a projection of a transparency showing computer-generated molten-metal squirts masked into a “painting” of mirrored dimensions. Standard reappears as an exhibitor this year (with a booth in nearly the same place) yet with work speaking volumes of how visual referents to the literal may have grown larger… but definitely not smarter. I literally couldn’t hang with Chadwick Rantanen’s Green Wing Blue Wing Teal Spread kinetic bird mobiles. Overall, my criticisms surrounding #ALAC2017 are minimal but weigh applicable to what I walk-away missing after every fair post November 9, 2016: a greater challenge— that unsettling feeling of not knowing what “it” is or where to hang “it” or who would buy “it” or why I did or did not like “it.” Considering the proliferation of the unknown in our current state of affairs— the role the media and moving-images play in every faculty of perception— the infectious scroll seeping through our experience of everything— why does it appear so eradicated from so much art on display in boxes both in and outside of fairs today? Tomorrow feels uneasy. Today does too. I want to see art that feels less complacent than yesteryear… not perched SO comfortably OK on top of today. Too optimistic? Maybe. But certainly consistent with the exhibitors I support representing artists today and a sentiment reflected in the highlights at ALAC this and every year: presentations that didn’t put a bird on it. Despite those expected and seldom “just keep-walking” segments, thoughtful curation spliced with a cunning spin on artifice differentiate the exceptional from the ALAC pack. Here are seven stand-out booths to seek-out this weekend: ECLECTIC COHESION 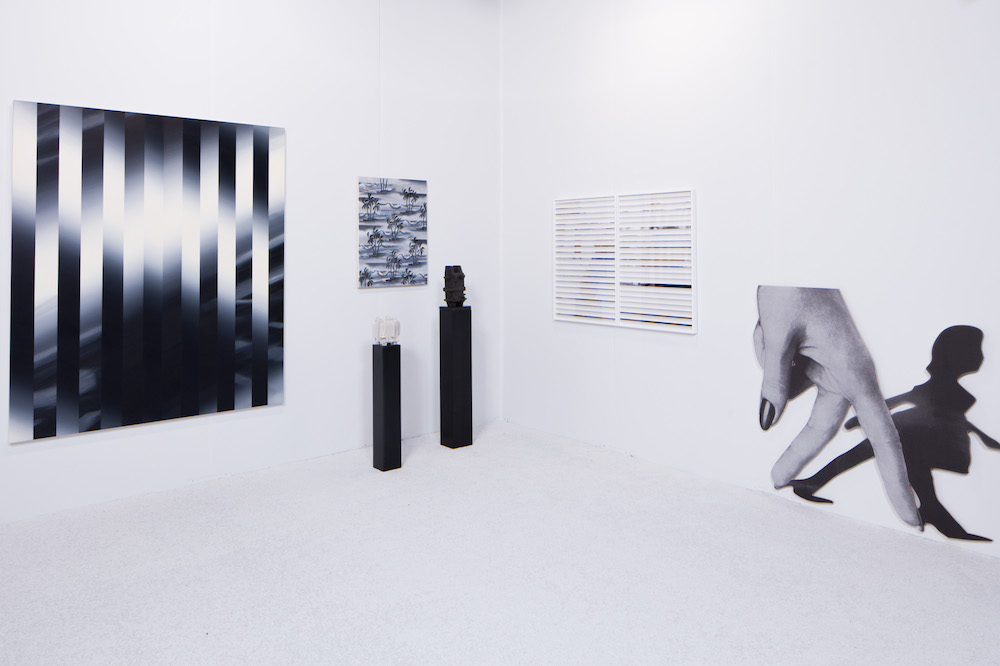 Anat Ebgi (Los Angeles) Booth B17 They say money can’t buy taste, but money can buy you an assortment of tasteful, impeccably placed pieces in the monochromatic booth of Anat Ebgi. White carpet illuminates a savory sense of progressive timelessness where the flawless, hard-edged, gradated stripes of Martin Basher hang to the right of contemporaries Neil Raitt, An Te Liu, Chris Coy, and Julie Henson. Together, they conjure a fluid and picturesque landscape evoking the possibility of transcendence— an entity strengthened through their individualized reflections on cultural semiotics, disposability, and transient states of being. 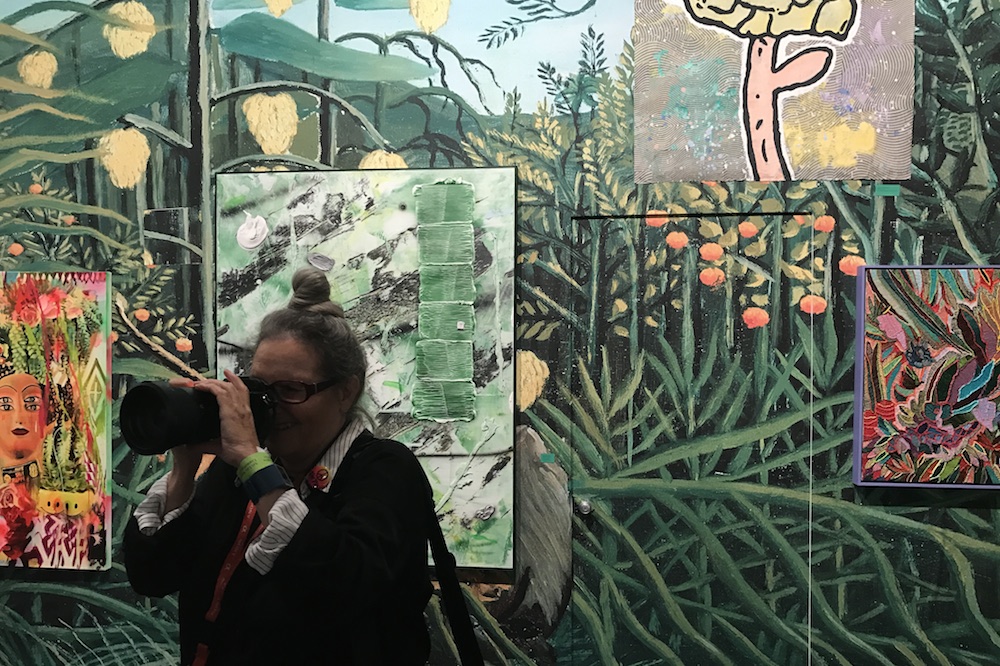 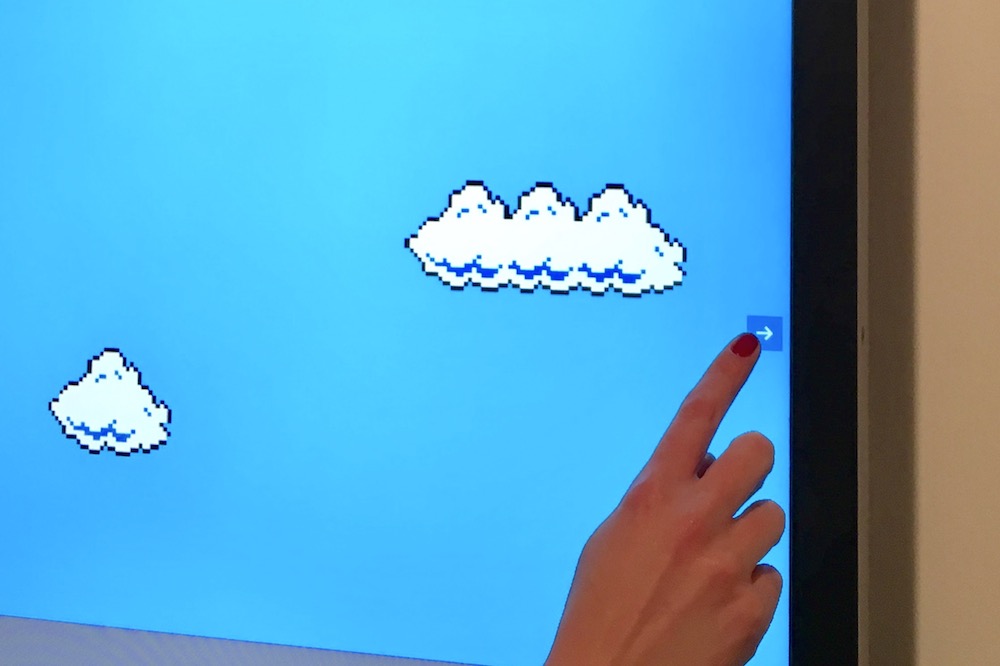 Yautepec (Mexico City) Booth E3 Sergio Bromberg utilizes the ArtRank index to make “Early Access” to the art market for purchase— two-years in the making, the database allows subscribers to be “made privy to important insider information” for acquisitions by providing “actionable forecasting.” Sound questionable? Most new ideas are. Navigate the two monitors yourself— and seek a verbal low-down— for a better understanding of how and why this is arguably the most touch-worthy project to debut at ALAC— and the only interactive piece I encountered… 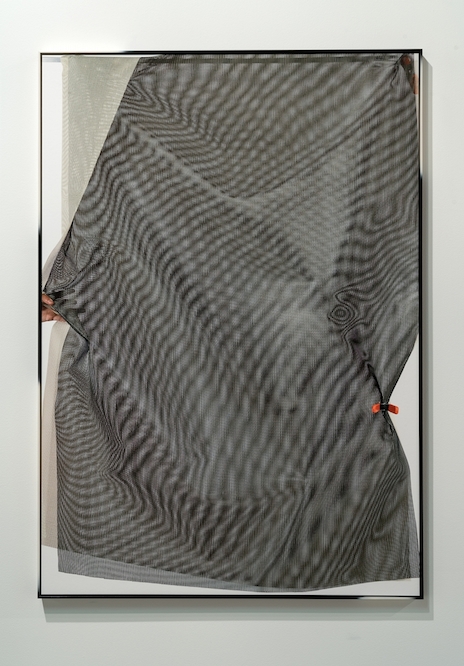 Parisian Laundry (Montreal) Booth B15 Karen Kraven’s sculptural images float within frames hued in custom gradient fades. A staged set is oddly juxtaposed and frozen in time— creating spaces where analog meets the handmade and surrogates of the familiar meld into pulsating planes “mesmerizing us as they reappear enlarged, divided and flattened.”   SOLO STAND-OUTS 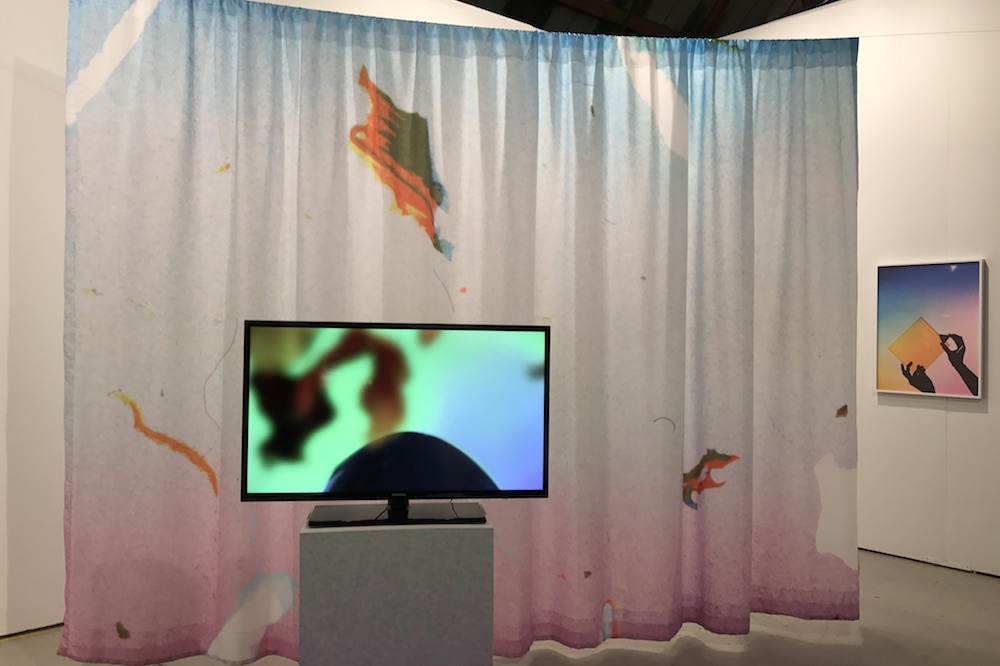 Honor Fraser (Los Angeles) Booth B1 Victoria Fu interweaves sculpture, video, and photography to present a multitiered installation where architectural objects invite an experience of commerce. Fu debuts her take-away poster in response to the recent inauguration ??!!?! as a neon sculpture amongst a scene lined with printed “rayographs.” A curtain cuts the white-box of Fu’s stage, strewn behind a video where her signature collaged content flickers on a pedestal flocked with a complimentary pattern— reflecting an interdisciplinary investigation of the digital image file’s perpetual adaptability. 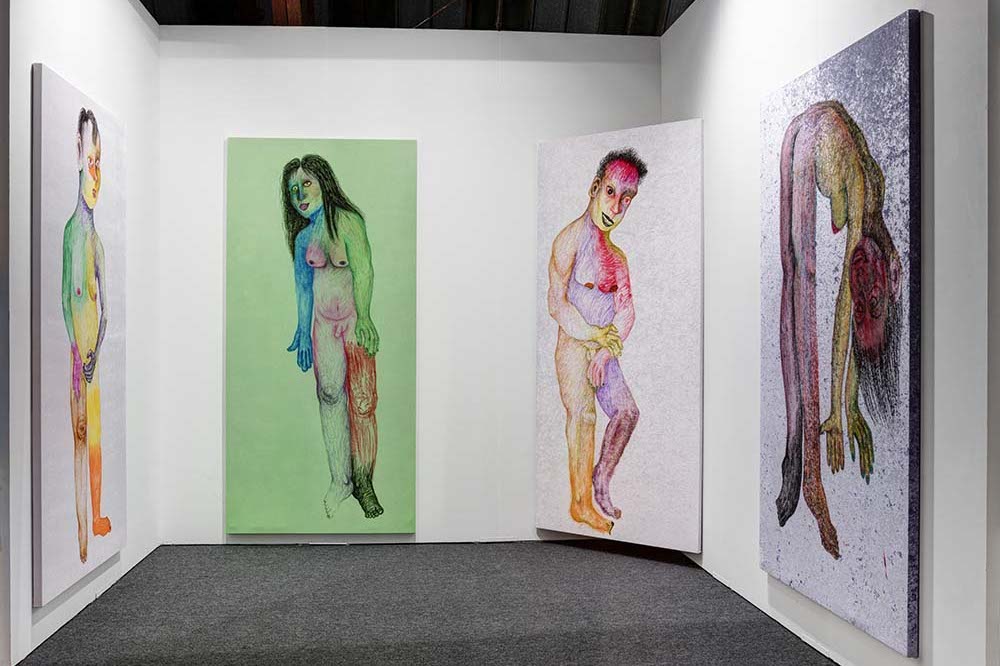 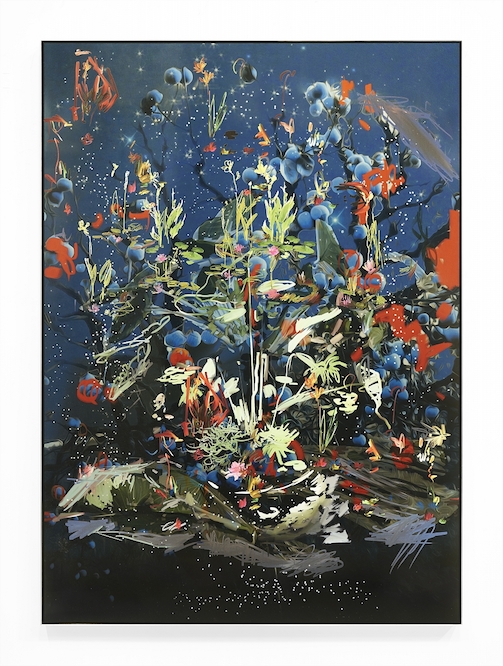 Ever Gold Projects (San Francisco) Booth D11 “Petra meet Petra.” I would have never thought Petra Cortright and Petra Collins would amount to such a perfectly incongruous paring. A Cortright triptych— but available individually as the red pin subtly notes under the centerpiece— blooms against the main back wall— their oceanic blues well matched with the warm vibrancy of Collins’ corporeal photographs lining adjunct to the left and right. Even if their aesthetic marriage is rooted by simply just being more “pretty” than anything else— well, it is and it works beautifully.

All photos © the artist and gallery.