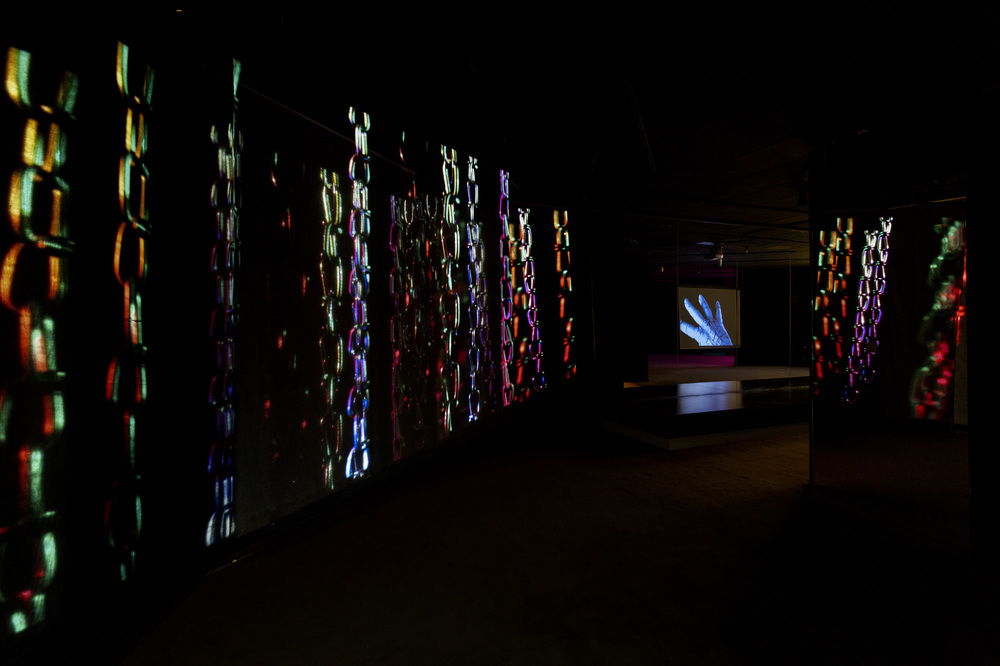 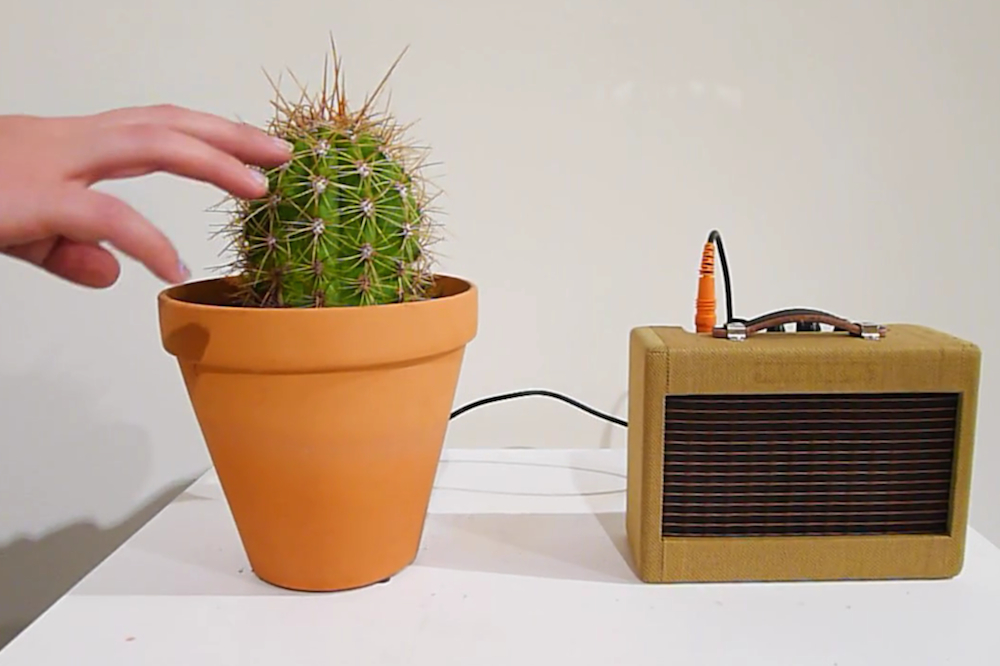 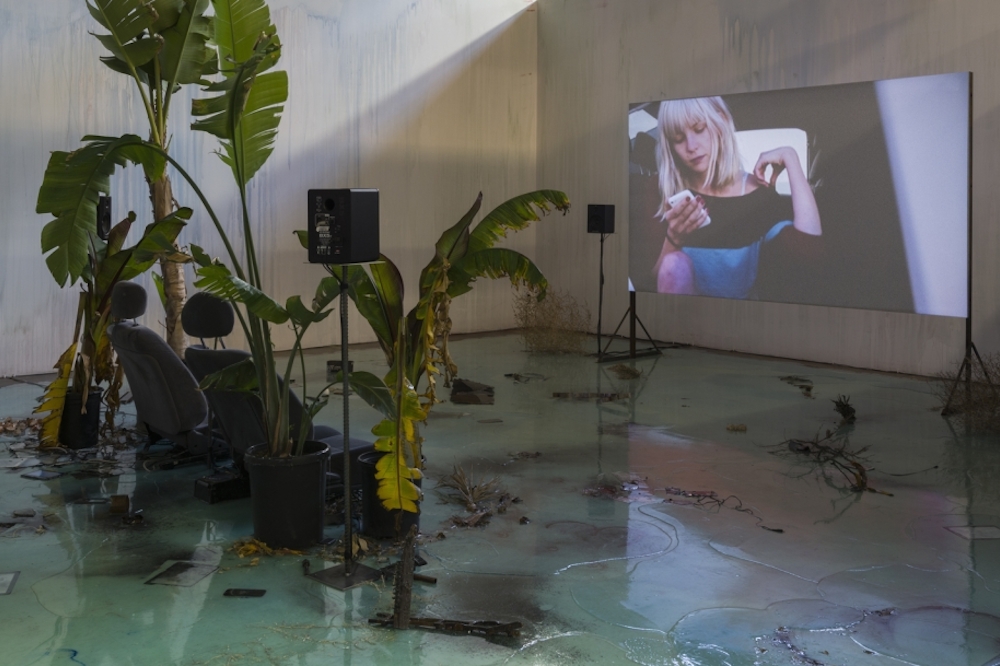 A Way To Leak, Lick, Leek at Farenheit (DTLA) January 31 – April 9 For her first LA solo presentation, Turner prize winning Laure Prouvost immersed the viewer in a cinematic construction residual from the outcome of a multi-month residency at Fahrenheit. Erecting an environment in which her drawings and films— reflecting the experience of driving throughout the city— became “central ploys in a scenario explor[ing] the boundaries of fantastic and urban escapism,” her site-specific installations were enhanced through incorporating elements of the city’s hallmark materiality. Most effective was the artist’s main installation where shattered technological junk, abandoned tropical trees, floating pineapples and branches of tumble weeds were strewn within a blue resin sea on the gallery floor. Curated by Martha Kirszenbaum, this natural artifice set the sensorial tone for viewing her new video Lick in the Past, offering “an apocalyptic vision reminiscent of a private pool the morning after a wild night.” 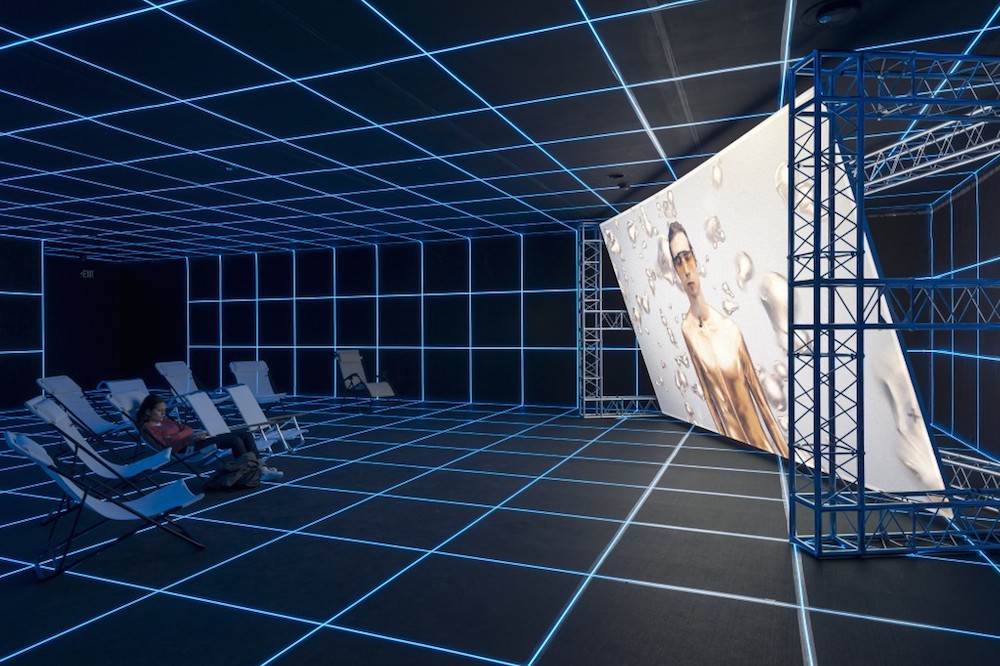 Factory of the Sun at MOCA (DTLA) February 21 – September 12 If you didn’t make it to the Venice Biennale in 2015… MOCA alleviated any simulated tears by presenting the U.S. premiere of Hito Steyerl’s landmark video installation Factory of the Sun in LA. In this immersive work, Steyerl probes the pleasures and perils of image circulation in a moment defined by the unprecedented global flow of data. Ricocheting between genres—news reportage, documentary film, video games, and internet dance videos—Factory of the Sun uses motifs of light and acceleration to explore what possibilities are still available for collective resistance when surveillance has become a mundane part of an increasingly virtual world. Organized by Assistant Curator Lanka Tattersall, Factory of the Sun tells the surreal story of workers whose forced moves in a motion capture studio are turned into artificial sunshine. 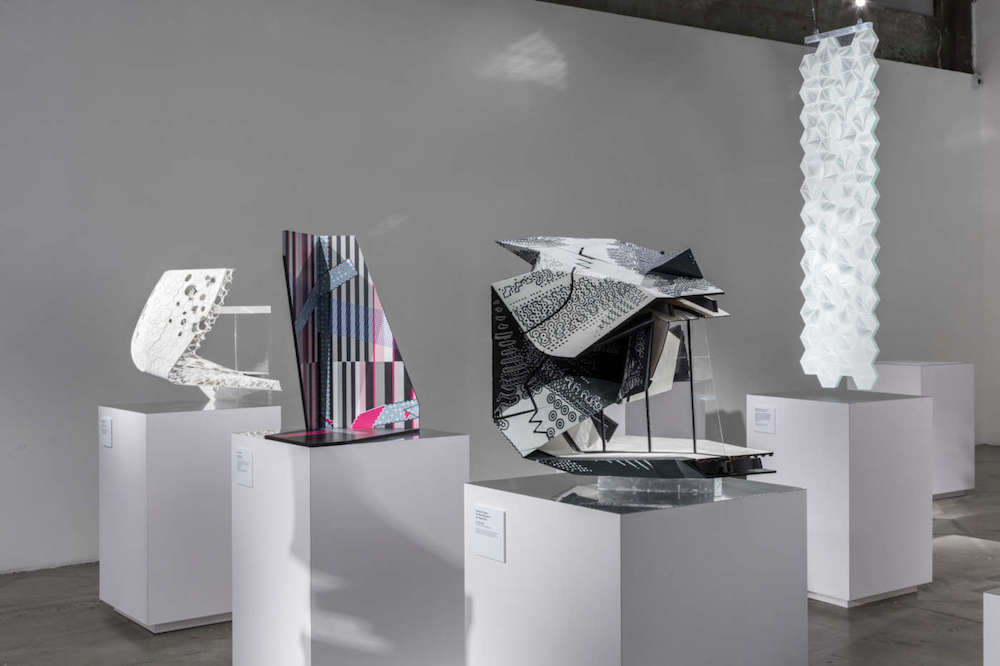 Close-Up at SCI-Arc Gallery (Arts District) March 11 – May 29 Examining digital technologies’ impact on architectural detail and the traditions of tectonic expression associated with it, Close-Up focused on the often overlooked ability for digital design to offer continuous degrees of magnification. 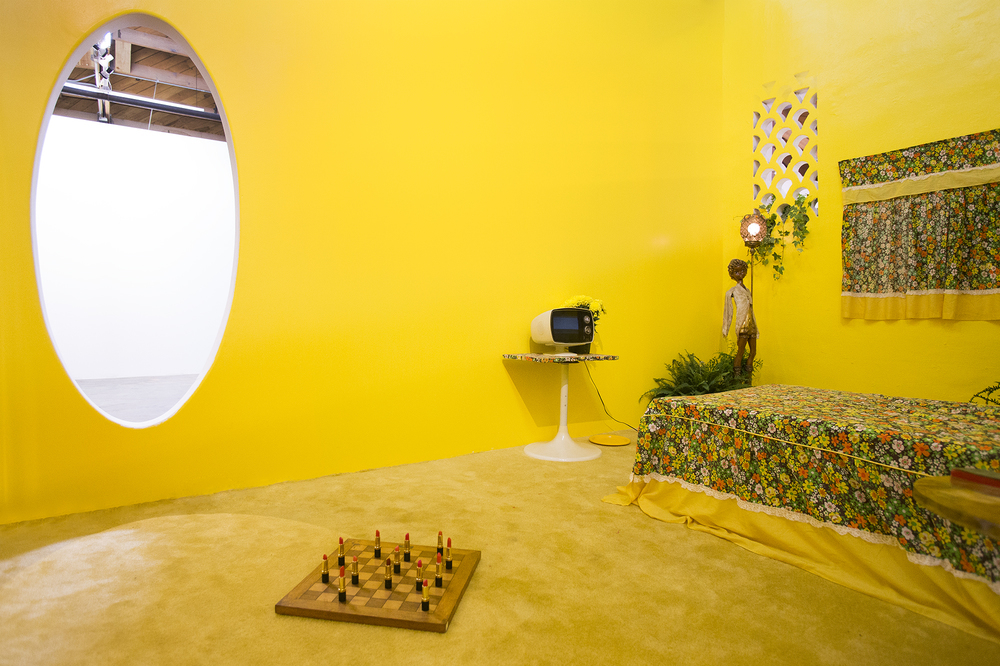 Wonderland Avenue at MAMA (Arts District) March 12 – April 23 Elaborating the idea of enacting painting as a portal, Ariana Papademetropoulos’ solo toggled between physical and psychological surfaces. In the show’s suite of paintings, “tears” added to the illusion of depth, lenticular postcards served as inspiration behind three nude portraits, and pastel hues saturated with trompe l’oeil suspended the viewer within a palpable tension of fantasy, desire, and female objectification. Carving an actual portal within the gallery, the viewer climbed through an oval cut-out where they were invited to enter a “boudoir-like sanctuary” encouraging us to “let down our defenses,” but most of all to to embody and participate as the “Alice” within the artist’s peculiar wonderland. 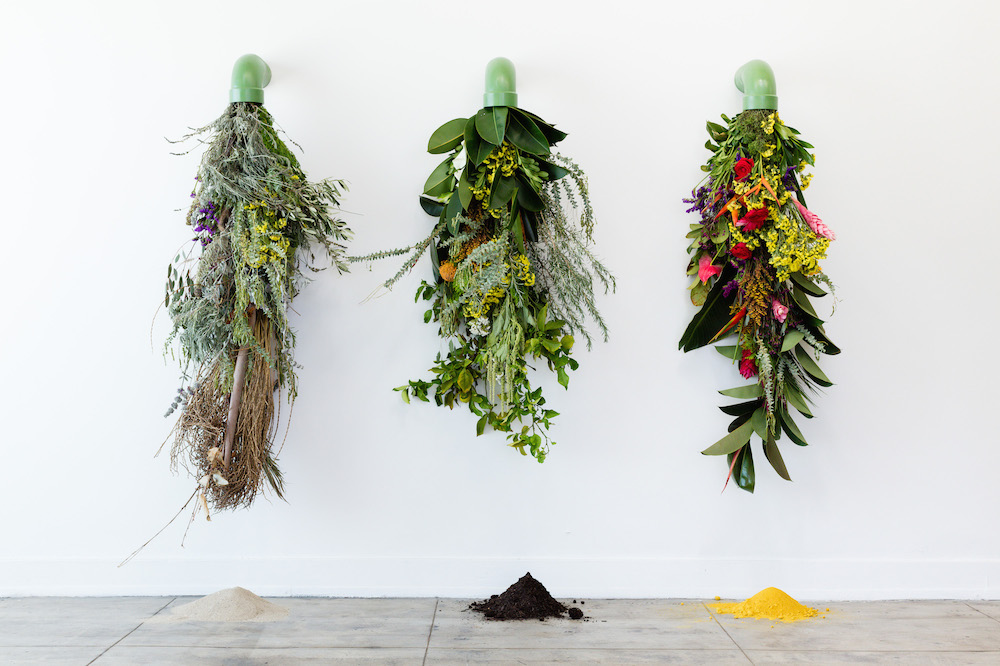 Polleō Alluve at Ochi Projects (Mid-City) April 23 – May 7 Filling the first floor gallery space Karolina Maszkiewicz presented installations comprised of plants and flowers— together creating an ever-changing, live environment, an ephemeral garden in an urban jungle. Alongside large-scale sculptures hanging from the ceiling and stacked on the ground, Maszkiewicz also created a series of faucets with upside-down flowers pouring out and landing in piles of pollen on the floor. In a two week period, these installations were subject to dry, wilt and die, “a kind of microscopic and in-fast-forward analogy to our own life trajectory.” Maszkiewicz stated her intent was “not to be morose,” but rather to use the “flowers as a symbol to represent our basic human instinct that strives for beauty, no matter the impermanence.” 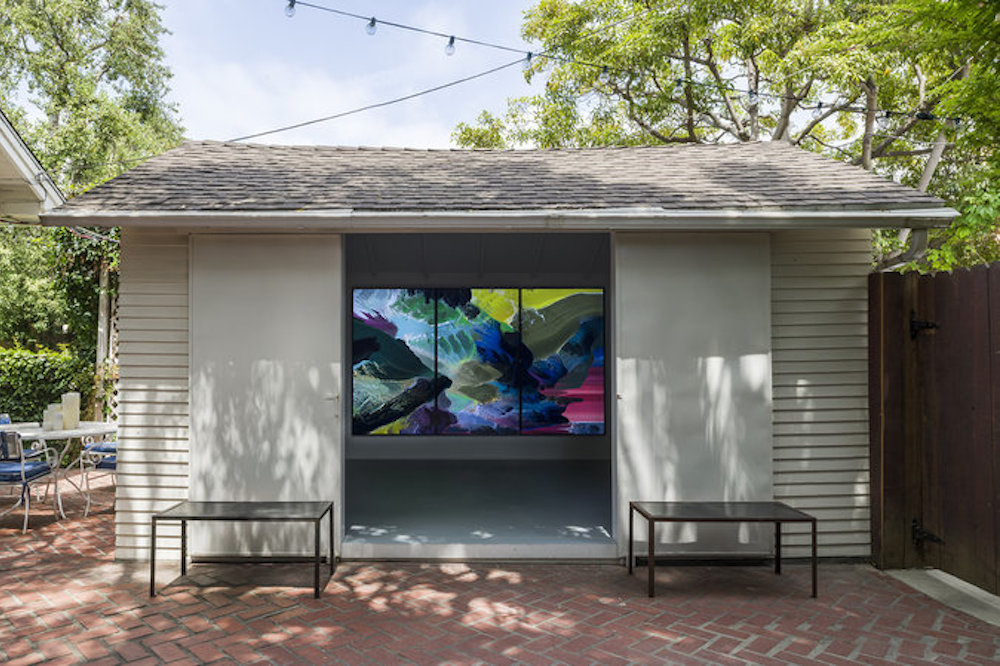 Sunflower Seed at Team (bungalow) (Venice) May 15 – July 31 With the show’s title drawn from a coding technique called the “random seed,” Tabor Robak’s solo was comprised of four new digital artworks, each generating live imagery via a dedicated custom-built PC. As a result, each work was therefore “durationally infinite, the likelihood of any moment repeating itself a statistical impossibility.” Departing from past iterations and looped data, this body of work “appropriating imagery from both real-world and digital sources,” stood to speak for and as the artist’s “newfound interest in the seemingly oxymoronic possibility of programming abstraction.” 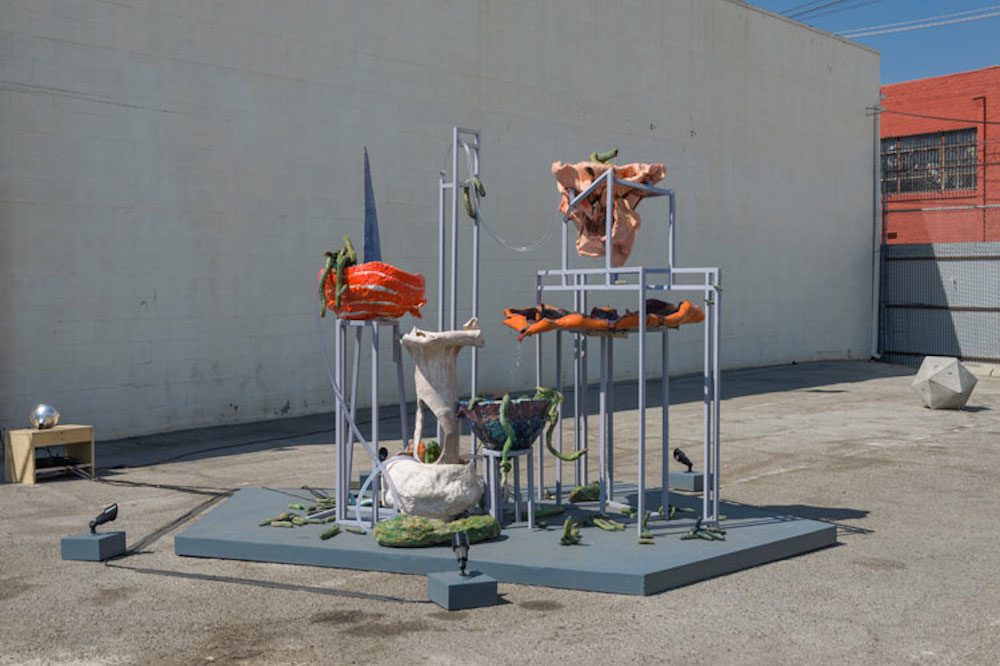 Grammatics Jar at Night Gallery (DTLA) September 16 – TBD Marking the second exhibition iteration and outdoor installation branded through the collaboration of Orr Herz and Roni Shneior, Grammatics Jar is the perfect fountain. Ceramic corpses of flesh-hued ceramic arteries twist and spill above, between, and beneath a modular grid that puddles into precarious pickles and tubular formations. At night, the fountain appears most bewitching, with its ceramic cavities illuminated by the fluid nature of its motored body. Hopefully, this is one to stay put within the Night Gallery patio well into and over 2017. 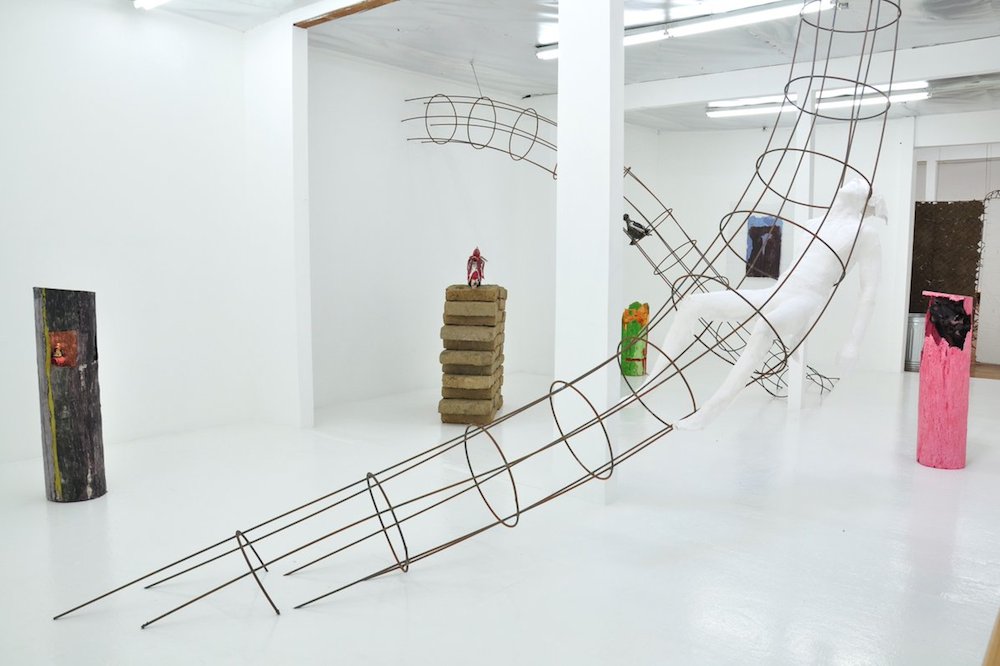 IN at Club Pro (DTLA) September 16 – October 16 Born from the first collaboration between Rafa Esparza and Timo Fahler, IN centered across the trajectory of following A Post-Industrial Snake: a sprawling rebar skeleton peeking and twisting throughout the two floors of the gallery space. Upon entry into the final exhibition room we met eye-to-eye with the head of the snake curled and encapsulated between the curtain of an adobe and plaster cast body of a post-ready made and post-urban landscape. 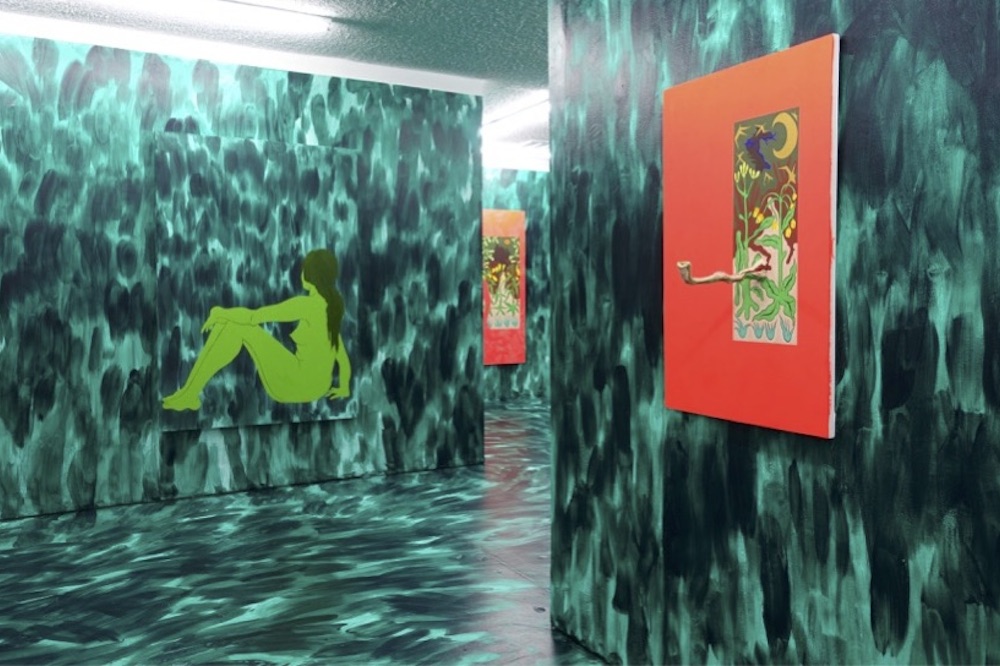 Absinthe at SADE LA (DTLA) September 18 – October 23 Drenching the gallery walls in a wash of “phthalo green and optical trickery,” San Francisco-based artist Chris Lux staged an environment for presenting a highly referential suite of figurative paintings. From Borges to Lautrec, Lux fueled an immersive experience positioning the viewer in a vortex of pigment situated in perpetual flux between painterly symbiosis and stylistic period. 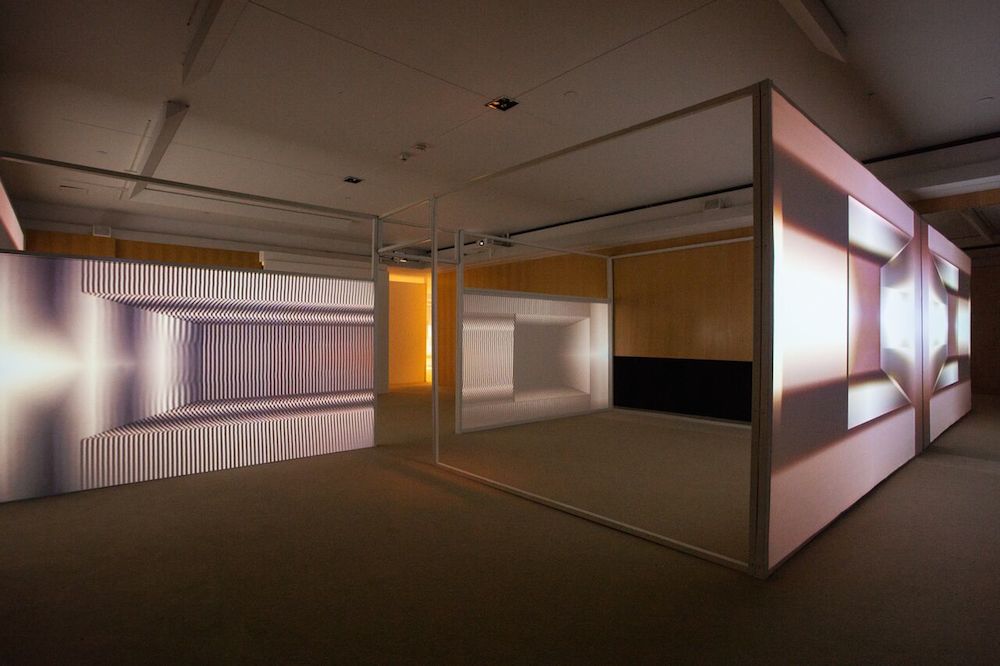 Lieux-Dits at Young Projects (West Hollywood) October 6 – December 30 The first solo exhibition by Sabrina Ratté extends the flatness of the image into multidimensional habitats— with the Montreal-based artist’s site-specific works exploring the nature of the electronic image as physical space, residing in both tangible and virtual expanses. Curated by Sharsten Plenge and Paul Young, Lieux-Dits elaborates Ratté’s cultivation of video as environment, with pieces such as Common Areas reconfigured as a sprawling room-sized 4-channel video installation and Fakeaway Haptics presented in a life-size mirrored box. 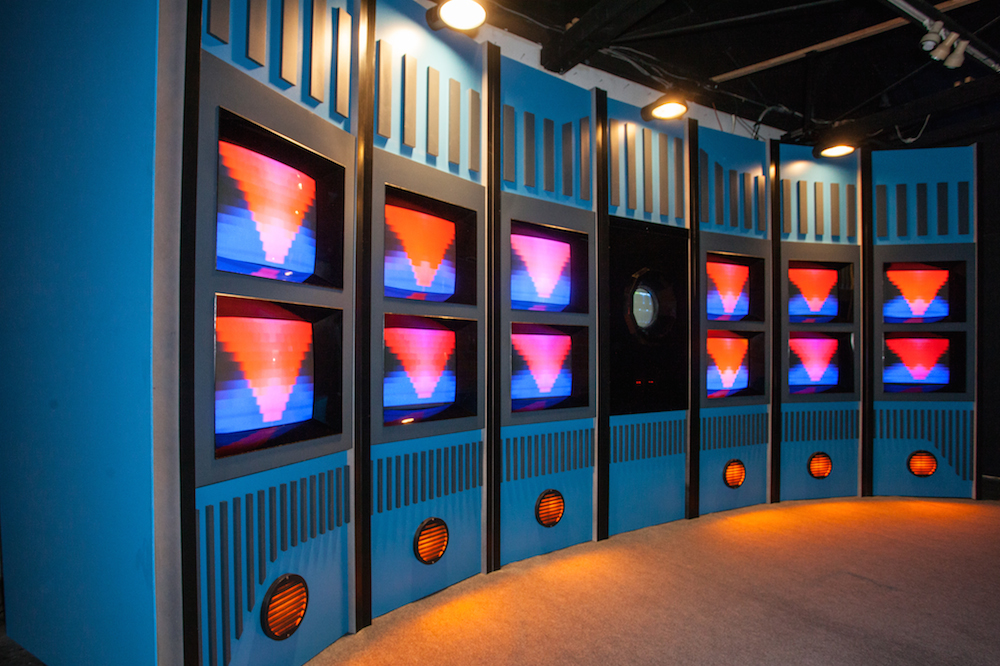 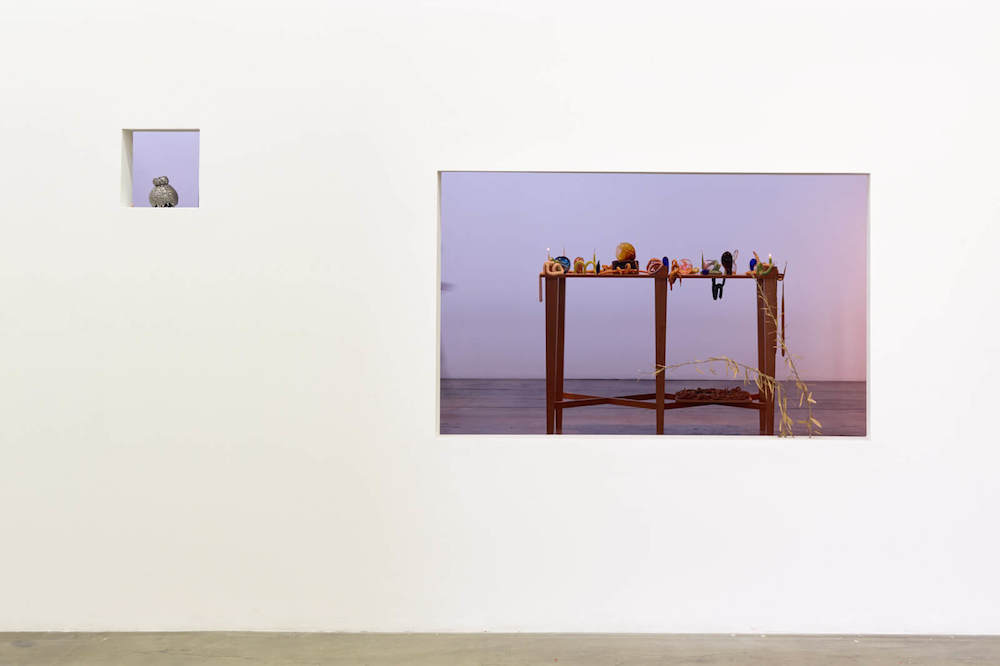 Being as a Thing at Ghebaly Gallery (DTLA) November 12 – December 23 For her debut solo show at the gallery— and in her practice as a whole— Kelly Akashi cultivates relationships among a variety of ‘things’ to “investigate their ability to transmit consciousness and how they can actively communicate their histories and potential for change.” Most of all, Akashi engages a delicacy and transparency which beckons us to look closer. The matter of the “things” she shapes and asks us to study are often temporal, malleable, and anonymous vessels— disappearing and melting into the ethers of the other is the hypnotizing magic these things possess: wax candles and blown-glass are melded into flickering sand-castle-like vestiges, bronze-cast hands dangle over closed entryways or are dissected into the fragile orbit of a slowly rotating ellipse. 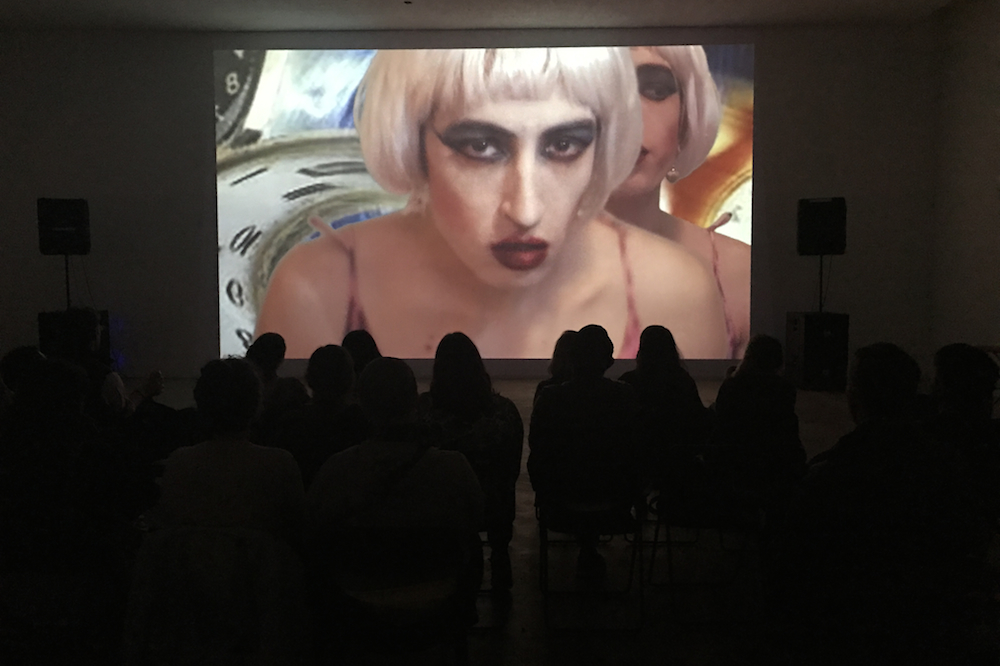 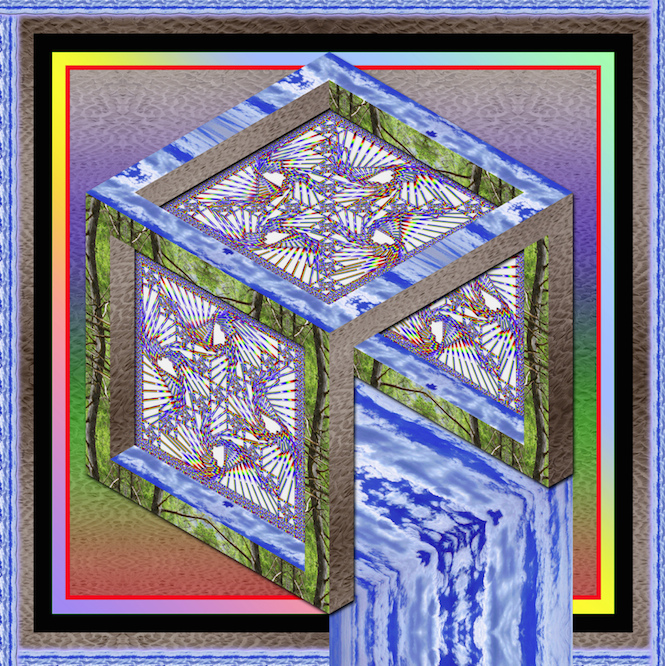 Show #27: Brenna Murphy at And/Or Gallery (Pasadena) December 10, 2016 – February 4, 2017 Portland-based artist Brenna Murphy works within disciplines— interweaving a suite of animation and graphics software to produce intricate sculptural domains that blur the borders between virtuality and physicality, liquid and solid, silicon and carbon, technical and folk. The exhibition features tapestries, 3D-printed sculptures on sandstone, and a room-scale virtual reality installation— the latter sculpting an unprecedented portal for us to enter the intricate lattice realms of Murphy’s colorful labyrinths IRL.

All photos © the artists and gallery.